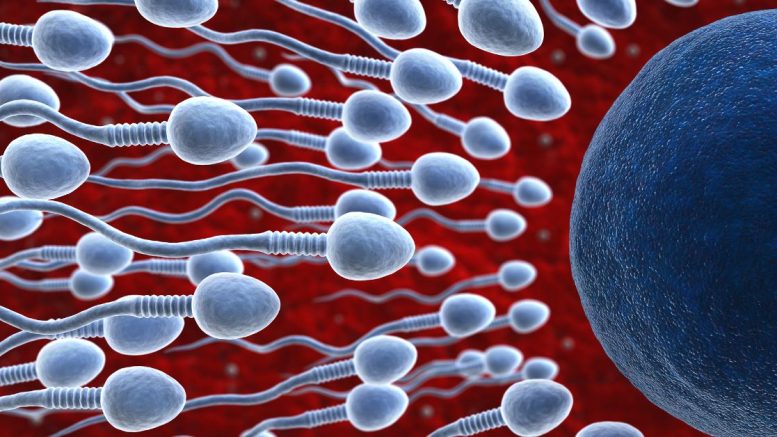 Morphology simply refers to the shape of the sperm. Morphology is evaluated by taking a microscopic look at the sperm sample to determine the percentage of sperm that have normal-looking parts and also to note if there are any particular sperm abnormalities that are most prevalent.

You can see stained slides of sperm from this link /ivf/strict-morphology-collection-spermac-stain-o2232.html. I can’t reproduce these images here – they are copyright protected –but anyone can see them through the link.

Below the large image is a series of images with pointers showing abnormal features of the sperm. Normal sperm should have an oblong-shaped head (where the DNA is stored) with an acrosomal cap at the foremost part of the head. The acrosomal cap or acrosome contains enzymes that play a role in the fertilization of the egg.

If this cap and its enzymes are not produced during sperm production, the sperm is unable to fertilize the egg by natural means. The cap normally comes off during the acrosome reaction just prior to fertilization, releasing enzymes that help dissolve the cellular coat around the egg (the zona pellucia) and exposing sperm receptors that can then bind to the egg.

Behind the head is a thickened region called the midpiece which contains cellular mitochondria. You may remember learning about cell mitochondria in basic biology- they are often referred to as the powerhouse for the cell.

In this case, they are the “engines” that drive the propeller-like tail to give the sperm its forward motion or motility. In fact, at least one study suggests that differences in sperm fertilization ability between ejaculates can to be attributed to the number of sperm in the ejaculate with functioning mitochondria.

The normal sperm is really a very elegant machine, having nothing more, nothing less than it needs to find, bind, penetrate and mingle its DNA with the egg’s DNA to create a new human being.

Any of these defects are deal-breakers when it comes to fertilization so conversely, the fewer sperm with problems, the more likely that the sample has good fertilizing potential. Just last week, I found a quite lovely sperm that had 6 heads on a single tail, which made it look every bit like a purple daisy under the microscope.

Unfortunately, this specimen, while arguably lovely had zero chance to achieve fertilization. How is the sperm processed for morphology? A sperm smear is prepared by spreading a tiny droplet of semen over a slide, allowing the slide to air dry, then staining the sperm with one or more dyes to make the structures of the sperm more visible. Then the technician uses a higher magnification setting on their microscope than for routine counting to get a close look at the fixed stained individual sperm cells.

Cells are judged to be normal or abnormal and the percentage of normal sperm is calculated by dividing the number of normal sperm by the total number of sperm counted. At least 200 individual cells should be assessed and counted to get an accurate estimate of the percent normal morphology in the whole sample.

Sperm can be graded as normal under one of two grading criteria: World Health Organization (WHO) criteria or Kruger’s Strict criteria. WHO has published their most recent edition (5th) of their semen analysis manual and also a publication by Cooper et al. which explains how the normal values were determined on their website- free for download.

If you are not an andrologist, it probably is enough to know that the WHO values were determined by analyzing the sperm from men all over the world (over 4500 men from 14 countries and 4 continents) whose partners took 12 months or less to conceive. Many labs still use the 4th edition normal values as their standard so I have provided both for you in the table below.

Every lab report must have a column that shows you what a normal result is for each parameter so you can compare your results with the normal values. Note that there are differences between what was considered normal in the 4th edition vs the 5th edition.

These changes don’t necessarily suggest that human semen is declining in quantity and quality (although some studies have suggested just that); changes in the population defined as normal and tested are also likely to explain the changes. If you look at the table below, you can see that the biggest change is in what is considered normal is for morphology (sperm shape). In fact, earlier editions of WHO criteria expected a higher percentage of normal forms for a sample to be called normal.

In the latest 5th edition, WHO has adopted the 4% normal forms as the cut-off for percent normal forms found in a normal ejaculate. The 4% cut-off is based on the scientific work of Doctors TF Kruger and R Menkeveld at Tygerberg Hospital in South Africa.

The scientific validity of this grading scheme is based on the fact that what normal sperm looked like was based on looking at sperm that had proven themselves as functionally competent, instead of looking at population of men whose partners became pregnant in less than a year.

Dr. T.F. Kruger and Dr. R. Menkeveld published Advantages of strict (Tygerberg) criteria for evaluation of sperm morphology which describes the positive correlation of their very strict grading system and other functional tests of fertilization ability.

Kruger’s definition of normal was based on examining sperm that were able to successfully migrate through the cervical mucous on their way to the egg rather than looking for shared traits among a group of presumed fertile men.

Kruger developed criteria for “normal” sperm shape based on functionally successful sperm. Interestingly, Dr. Kruger and his colleagues have since published various studies that show that ejaculates with lots of Kruger normal sperm also have a better prognosis for successful IVF fertilization, suggesting there criteria of normal are correlated with fertilizability.

You can read about the evolution of WHO criteria and adoption of strict criteria in this paper, “Clinical significance of the low normal sperm morphology value as proposed in the fifth edition of the WHO Laboratory Manual for the Examination and Processing of Human Semen” by Dr. Roelof Menkveld. Kruger Strict analysis requires that each apparently normal sperm be measured for head size. According to Kruger, the head length for normal spermatozoa may vary between 4.0 and 4.5 ?m, with a mean length of 4.07 ± 0.19 ?m and a mean width of 2.98 ± 0.14 ?m.

This precision measurement requires an eye-piece micrometer to be placed in the microscope tube, projecting a “ruler” onto the image of the sperm so that the sperm head can actually be measured.
As you might imagine, actually measuring each possibly normal sperm head in the sample is extremely tedious. How big is a ?m? As a frame of reference, a single red blood cell is 5-6 microns in size, 10 fold smaller than the WIDTH of a human hair which is 50-60 microns wide.

What is a normal sperm by Kruger’s strict criteria? A normal sperm head must be oval with a well-defined acrosome that covers 40-70% of the head. The normal head has a length of 4-4.5 µm and a width of 3 µm with very little allowance in either direction (plus or minus 0.14 µm). The length to width ratio should be about 1.5. All borderline-normal head forms and/or spermatozoa with nearly oval heads with no gross abnormalities are still classified as abnormal if they don’t meet the head size criteria.

Any abnormalities in the neck, midpiece or tail also automatically render the sperm abnormal regardless of head quality. The normal midpiece length is 1.5 times the head length, the width of the midpiece is less than 1 µm and is slender and attached to the tail. The tail is 45 µm in length, is not coiled and is slightly thinner than the midpiece.

In sperm production, left over cytoplasmic drops are produced and may persist but are only considered normal if their size does not exceed ½ the size of the sperm head. Is it any wonder that most sperm techs hate this tedious test? Not surprisingly, computer analysis software has been developed to measure sperm under the microscope and identify them as normal or abnormal by strict criteria. Photos of normal and abnormal sperm measured by a computerized counting system can be found here.

More stained sperm images also available here. What is the good news for patients with poor morphology results? Regardless of your semen analysis result, as long as you have some recoverable sperm with normal DNA and signs of life (even a twitch will do) that will fit into the pipette, a good ICSI tech can push that sperm into your partner’s eggs and you can still have children.