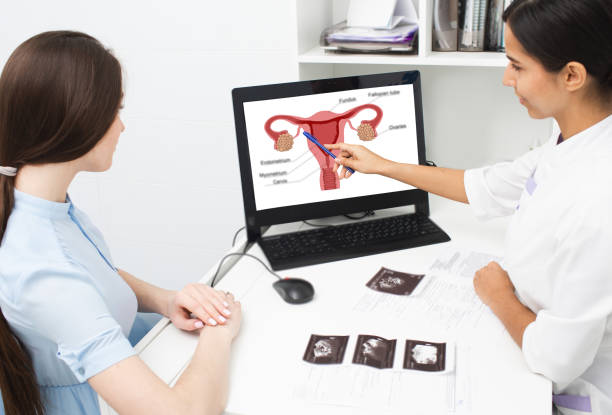 Can Ovarian Cyst Cause Infertility

Can Ovarian Cyst Cause Infertility – Overview

Ovarian cysts are sacs inside or on the surface of the ovary that is typically filled with fluid. The ovaries are two in females. On both sides of the uterus, there is one ovary.
The size and form of each ovary are comparable to an almond.

In the ovaries, eggs grow and become mature. Throughout the years of childbearing, eggs are released on a monthly cycle. Obstetrical cysts are typical. You often experience little to no discomfort, and the cysts are not harmful.

Within a few months, the majority of cysts disappear without therapy.

However, ovarian cysts can occasionally twist or burst open (rupture). Serious symptoms may result from this. Get regular pelvic exams and be aware of the signs that could point to a significant issue if you want to safeguard your health.

The most frequent kind of ovarian cysts, functional cysts, are not caused by any particular condition. Ovulation is the cause of their occurrence (the release of an egg from the ovary). These cysts can indicate that your ovaries are working as they ought to. Functional cysts often decrease over time without particular therapy, usually within 60 days.

Cysts in Follicles. Each month as part of your menstrual cycle, an egg is released from a tiny sac in your ovary called a follicle. A follicular cyst develops when a follicle fails to release an egg. Instead, the follicle enlarges and becomes more fluid-filled.

Corpus Luteum Cysts. The corpus luteum is a cluster of cells that produces hormones after the follicle releases an egg. Then fluid builds up in the corpus luteum, it grows and creates a cyst.

Other Types of Ovarian Cyst

Ovarian cysts do not always result in response to your menstrual cycle. They often don’t signify a sickness, but your doctor might want to monitor them to make sure problems don’t develop. They consist of:

Endometriomas. These cysts are filled with endometrial tissue, which is the same tissue from which you bleed each month during your period.

Cystadenomas. These cysts develop on your ovary’s surface. They could be filled with a fluid that is thin and watery or thicker and mucous-like.

Cysts on the skin (teratomas). Cells that make up many different types of biological tissue, including skin, hair, teeth, and even brain tissue, make up dermoid cysts.

Do Ovarian Cysts Affect My Possibility of Conceiving?

A fluid-filled sac called an ovarian cyst can be discovered on or inside the ovaries. Many women experience them at some point in their lives since they are so prevalent. The majority are painless and harmless, so they typically go undiagnosed and vanish over time without the need for treatment.

Ovarian cysts are so frequently only discovered via standard pelvic exams or ultrasounds. If you are trying to get pregnant but are having trouble because you know you have ovarian cysts, you might be asking why.

Usually, Ovarian Cysts Do Not Result in Infertility.

The likelihood of pregnancy is not often affected by having an ovarian cyst; therefore, physicians would typically only look into it further if a couple has been trying to get pregnant naturally with regular sex for a year without success.

However, Polycystic Ovary Syndrome (PCOS), which causes numerous tiny cysts on the ovaries, is a disorder that can impair fertility.

While many PCOS sufferers are successful in getting pregnant naturally, some may need medication to control their ovulation or even start ovulating. These women are typically administered clomifene, which encourages the monthly release of an egg from the ovaries.

If medicine doesn’t work, it might be advised to have a procedure known as laparoscopic ovarian drilling (LOD), which is done under general anesthesia.

The majority of ovarian cysts are “functional,” appearing as a natural byproduct of the ovulation cycle and dissipating on their own. Though it happens seldom, some women could have issues with cysts. Functional cysts have the potential to burst, hemorrhage, and cause excruciating abdominal discomfort.

Different types of cysts referred to as “pathological cysts,” might develop in other circumstances. Dermoid cysts can get rather big and contain extra tissue like hair, skin, or teeth. Cystadenomas are tumors that can include either watery fluid or mucus and arise from cells that cover the ovary’s outer layer.

For ovarian cysts, either of these types may need to be surgically removed. However, unless the surgeon removes one ovary, this procedure shouldn’t impact fertility. Though uncommon, this only happens when cysts are exceptionally huge, intricate, or malignant.

It is strongly advised to get surgery before becoming pregnant to prevent difficulties.

How To Improve the Chance of Your Pregnancy

You can do several things to increase your chances of getting pregnant naturally:

• Make sure you eat balanced food and a healthy diet.
• Regularly exercise for 30 minutes, three to five days per week.
• Cease smoking and limit your alcohol consumption.
• Sleep not less than seven hours per night.
• every day, get folic acid supplements.